The market for mechanical keyboards has boomed in recent years and the pandemic only added fuel to it as people looked to improve their home setups (and spend their stimulus checks). Today, you can find anything from a $20 AliExpress special to a $600 Keycult board — before keycaps and switches, if you can even get one. And then there is Angry Miao’s Am Hatsu, a wireless ortholinear split ergo keyboard with an aluminum body that sold for $1,600 (but with switches and keycaps). It can charge wirelessly and if you opt for the company’s Cybermat, you’ll never have to think about charging it. That’ll set you back another $380, though.

So, for $2,000, you get a whole new typing experience and a heck of a learning curve, but you’re going to have a hard time finding one. Angry Miao tells me it doesn’t currently have plans for another Am Hatsu production run, so chances are the prices on the secondary market will be quite a bit more than the original retail price.

Now, let’s just get this out of the way at the outset: Whether any of this is worth the money is a decision you can only make for yourself. At this price, it’s either something you dismiss at the outset or an impulse buy to reward yourself for your smart crypto investments. I’m not sure there’s a lot of room in the middle.

If you’re new to mechanical keyboards and want to be able to customize your experience, a GMMK Pro, Keychron Q2 (or the upcoming Q3) or a Cannonkeys Bakeneko65 will all give you a great experience for less than $250, all in. Or if you don’t even want a custom experience, just get a Leopold or a Ducky and call it a day. But if you are in the market for a split ergo, you don’t have a ton of choices. Still, an Ergodox EZ or ZSA Moonlander will get very close for a fraction of the price — and may have some advantages, too. And there’s always the Kinesis Advantage 2, with its single-piece design but a similar concave kind of ortholinear layout. Or if you just want to dip your toes into ortholinear keyboards, a Drop Planck or Preonic would make for a good entry point.

While you may not have heard of them before, Angry Miao isn’t completely new to the mechanical keyboard market. With the Cyberboard, which features a large LED panel at the back of the board, the company had a bit of a cult hit that has now sold out of three production runs after plenty of positive reviews. The company tells me a new, Matrix-themed Cyberboard should launch next month.

Am Hastu plays in a different market than the Cyberboard, though, and definitely isn’t for everyone. Just learning to use this new layout is a challenge. With keys that are in a straight line instead of the staggered layout of traditional keyboards split between two sides, you do get the benefits of being able to relax your shoulder muscles and barely having to move your wrist. But just think about relearning to use your right thumb for pushing space and CTRL or your left thumb for backspace and enter. And that’s before you learned the layering system for typing numbers because, like many similar boards, the Am Hatsu doesn’t have a number row, let alone F-keys or arrow keys. There’s a reason 65% boards are so popular in the mechanical keyboard community. They give you all of those (minus the F-keys) in a nice compact format that even has space for page-up and page-down buttons.

I’ve spent a week with the Am Hatsu now and am typing this story on it, but it isn’t for the faint of heart. My regular typing speed is nothing special, at somewhere between 80 to 90 words per minute. It went down to closer to 15 words starting out and slowly moved back to 30 after a week. That’s not great, but it is also not an indictment of the Am Hatsu. It’s simply a layout you have to get used to. 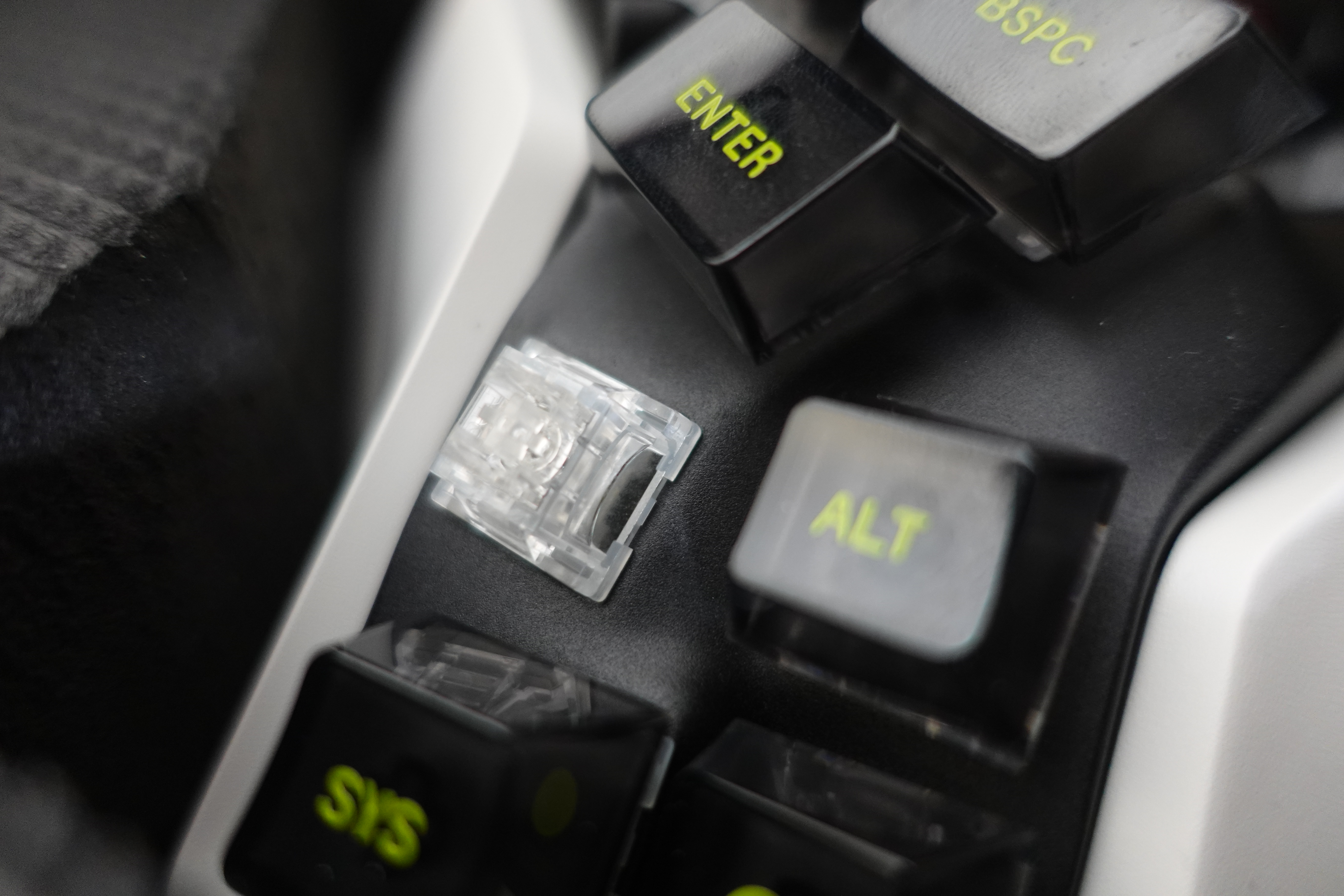 If you take the plunge, though, the hardware itself is absolutely beautiful. Angry Miao talks a lot about how the Am Hatsu’s distinct aluminum body was machined with a five-axis CNC machine. That’s not a cheap process, but it shows. The build quality here is something else. I don’t think you’ll be able to find any split ergo keyboard that comes anywhere close. Angry Miao says the design was inspired by HBO’s Westworld. I guess I can see that, with its black and white color scheme and overall design language, but it’s not all that important. The less said about Angry Miao’s NFT scheme, the better (I find that holds true for all NFTs), but to get a board, you basically have to buy an NFT on OpenSea, which you can then trade in for a physical board.

The design is rounded out by small LED strips on the inner side of each half that show that the individual sides are on, and their respective charging state. They are pretty unobtrusive and mostly just add a nice touch of color to the board.

The battery is supposed to last about two weeks of daily use on a full charge. With the Cybermat, it won’t matter since it’ll just draw power from that, but otherwise, there’s a USB-C port underneath each half. That’s not a great place for it. It’s either a way to sell more Cybermats or just a matter of design over function, since the design team clearly tried to hide any ports and screws, leaving only the underside for the charging port. You’d think designers had learned from Apple’s infamous Magic Mouse 2. 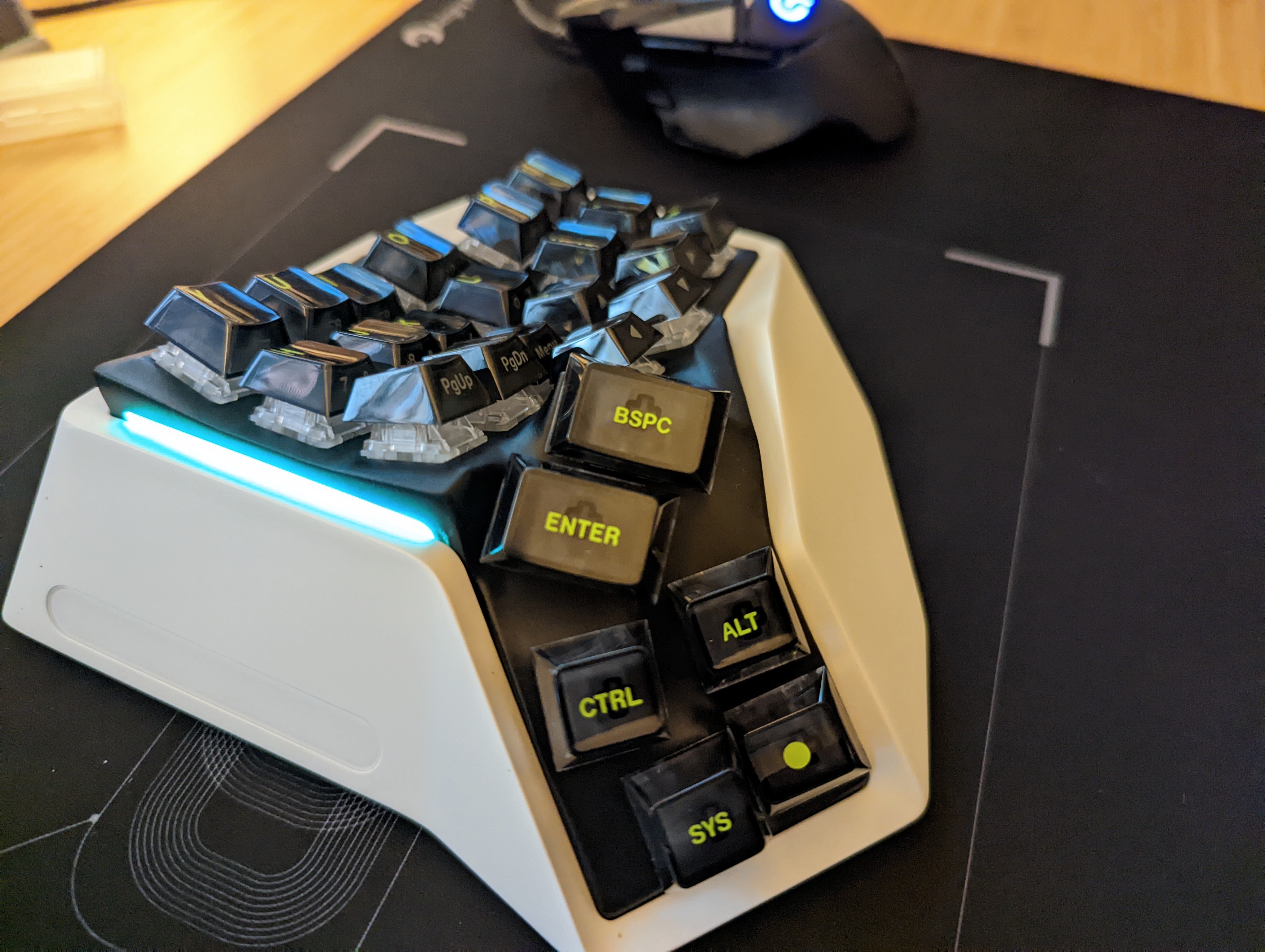 The Bluetooth connection works very well, though, and I didn’t notice any lag. Unsurprisingly, you can’t use the keyboard when it’s wired to your computer. It’s Bluetooth or bust.

Another design choice I can understand better but don’t like is that for $1,600, you’re stuck with one kind of switch, Angry Miao’s Icy Silver switches. These are linear switches (so there’s no tactile bump like you might know from a Cherry Brown switch; you can insert your own joke here how Cherry Browns are objectively the worst switch and barely semi-tactile anyway). I like linear switches, so this works for me, but this is not what’s called a “hotswap” board, so you can’t change the switch for something closer to your personal preference.

For what it’s worth, the TTC-made “Icy Silver” switches feature long dual-stage springs that take an initial force of 45 grams to activate. That’s a bit lighter than the popular Gateron Yellow switches with an actuation force of 50 grams, and slightly heavier than the TTC Icy Speed switches on which Angry Miao’s switch is based. Most importantly for keyboard geeks, though, these are really smooth switches and I have yet to feel any scratchiness or ping noise (and if that doesn’t mean anything to you, just know that that’s a good thing).

The keycaps, I’m not too fond of. These are a variation of Angry Miao’s see-thru Glacier keycaps and they are a bit too thin and smooth for my taste. They look great, but I’d likely replace them with a PBT set, though finding a set with all the right keycaps for this unusual layout may prove to be tough.

If you’re really into mechanical keyboards, you’ll now ask: but does it thocc? Thocc is all about the sound the keyboard makes, with a lot of people preferring a kind of deeper sound, but in reality, nobody really knows. The Am Hatsu doesn’t have that deep sound. It’s more of a higher-pitched one, but not unpleasant by any means.

With most enthusiast keyboards, you can easily change the sound profile. High-end boards typically come as DIY kits that allow you to make changes to the design. The Am Hatsu does not. This isn’t meant to be a keyboard for tinkerers. Indeed, you’re not going to easily find a screw to even open up the board. Sadly, that also goes for the software. You can modify what every key does, but you only get the two default layers to work with. As of now, you can’t add additional layers, something that’s pretty standard, especially in the world of small and ortholinear keyboards that.

But let’s talk about the Cybermat, too. It’s a heavy piece of hardware, weighing in at just over nine pounds, made out of a single 900x340mm piece of aluminum, making it a bit thinner than the standard 900x400mm size that’s typical for deskmats.

The version I tested is the company’s second iteration and, like the Am Hatsu, it’s something else. We’re basically talking about a giant wireless charging station, powered by a 90W GaN charger that features a total of 12 charging coils, two at the sides, mostly for charging your phones and the rest in the middle for charging the two keyboard halves — or you could use those for phones and other devices, too. 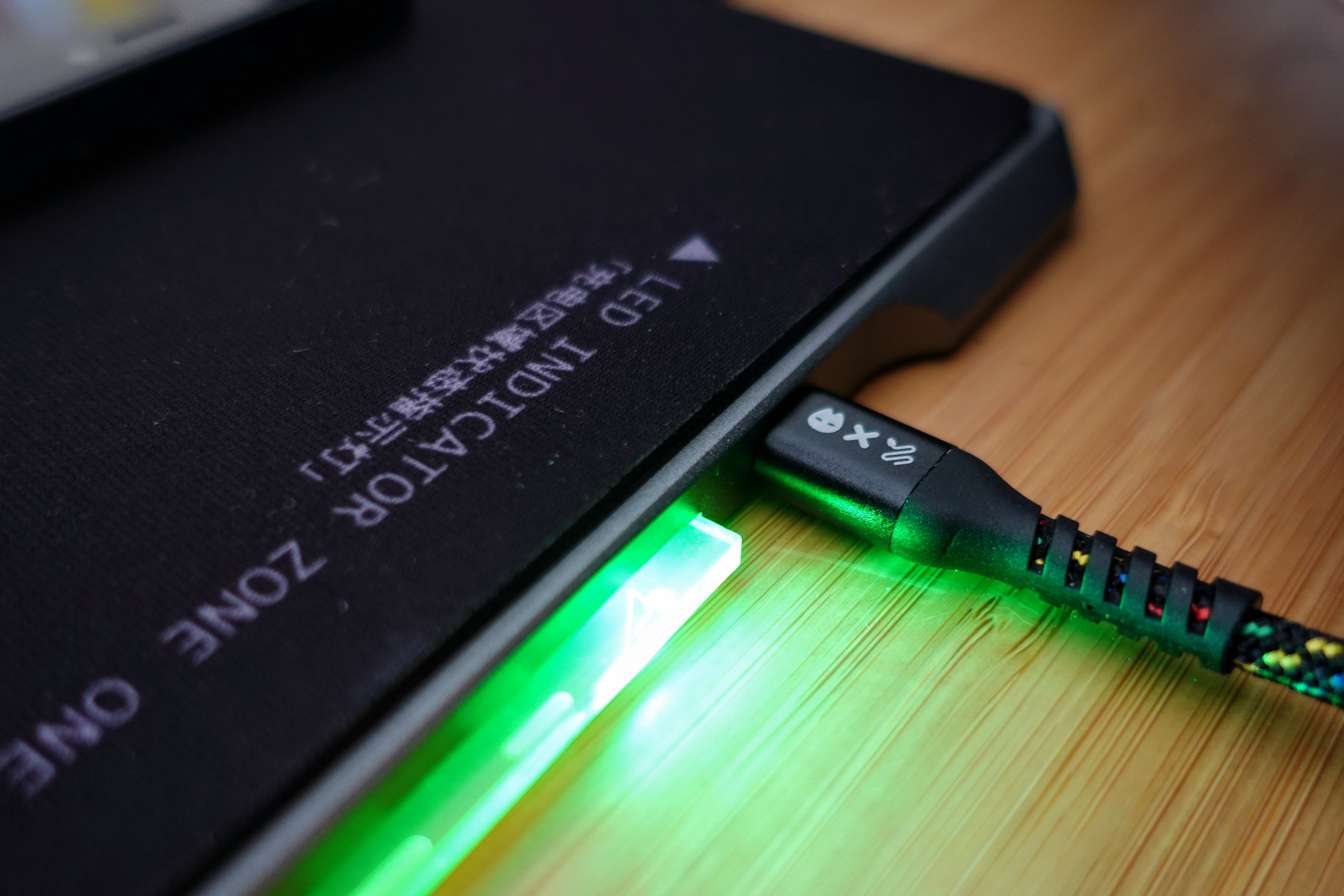 It comes with a deskmat to put over it that shows you exactly where the coils are. Angry Miao says the mat was inspired by Tesla’s Cybertruck and that inspiration isn’t hard to see, with its hard edges around the corners and at the bottom of the mat.

There is a small cutout in the back-left corner with charging indicators for the four charging zones and the USB-C plug.

It’s a solid piece of hardware (I mistakenly stepped on it once while I was setting it up and it didn’t budge). The price is hard to swallow, but the same goes for the keyboard. It’s not a gadget you just buy to give it a whirl and see if it works for you.

For both the Am Hatsu and the Cybermat, Angry Miao is pretty clear that you only have 72 hours after receiving it to make a return — and only if it’s unused. Essentially, sales are final, which may be a hard pill to swallow, given the price.

This kit isn’t something that makes for an easy buying recommendation. If it’s exactly what you’re looking for and money isn’t an issue, go for it. If you’re on the fence, maybe try one of the more affordable options first. You won’t be able to find the build quality and eye-catching design of the Am Hatsu anywhere else — but that goes for the eye-watering price as well.

News Lois - March 5, 2022 0
Welcome back to This Week in Apps, the weekly TechCrunch series that recaps the latest in mobile OS news, mobile applications and the overall...

SpaceX, Northrop Grumman to resupply the ISS through 2026 – TechCrunch

News Lois - March 26, 2022 0
NASA just placed another order with SpaceX. The agency said Wednesday it had ordered six additional resupply missions from the company under its Commercial Resupply...

News Lois - May 3, 2022 0
Databases are growing at an exponential rate these days, and so when it comes to real-time data observability, organizations are often fighting a losing...

Wayflyer raises $150M on a $1.6B valuation for a new spin on providing finance...

News Lois - February 1, 2022 0
E-commerce has continued to boom in the wake of the Covid-19 pandemic, but running an e-commerce business has also become significantly more chaotic, with...

A changing of the guard – TechCrunch

News Lois - May 7, 2022 0
Welcome to The TechCrunch Exchange, a weekly startups-and-markets newsletter. It’s inspired by the daily TechCrunch+ column where it gets its name. Want it in your inbox every...
© All Right Reserved By Modernmommytime.com